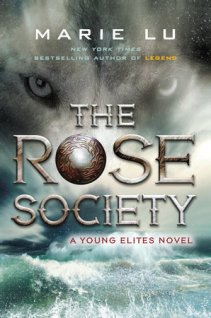 The Rose Society by Marie Lu

Once upon a time, a girl had a father, a prince, a society of friends.

Then they betrayed her, and she destroyed them all …

Adelina Amouteru’s heart is set on revenge. Now known and feared as the White Wolf, she flees Kenettra to find other Young Elites in the hopes of building her own army.

Her goal: to strike down the Inquisition Axis, the white-cloaked soldiers who nearly killed her.

But Adelina is no heroine. The leader of the Inquisition, wants her dead, and her former friends at the Dagger Society want to stop her thirst for vengeance. Adelina struggles to cling to the good within her. But how can someone be good, when her very existence depends on darkness?

The Rose Society is the second book in Marie Lu’s Young Elites trilogy. Having loved the first book, I was glad to find The Rose Society was just as dark and addictive. As the series doesn’t follow your typical protagonist, it makes the story so much fresher. It makes such a change from the hero-centric plotlines I am used to reading. Adelina is such a complex character, inhabiting neither the space of hero or villain. What makes the book so interesting is that Lu makes me sympathise with her. I understand exactly why she is doing what she’s doing, and it makes me think, is she really bad? Are the others really good? It makes it so exciting not really knowing if any of the sides are truly ‘good’ or ‘evil’.

Once again Adelina is really and truly the focus of the book. Told from her point of view, her internal conflict is such a big driving force for the story. Lu does such a good job of portraying what’s going on in Adelina’s mind. I truly understand her character and feel completely wrapped up in her wild emotions, in a deep way I don’t often find in young adult books.

However I once again found that the rest of the characters were sidelined because so much focus is on Adelina. I didn’t get this feeling as much as I did in the first book, thankfully. They were portrayed much better this time round and I like that they’re all flawed too in different ways, which makes them believable and human. Violetta is a really interesting character and I enjoyed seeing more of her in this book, as well as getting some more back story to Lucent and Maeve. Teren’s story is also very compelling.

Magiano was a great addition to the cast, as he has a bit more spark and playfulness than the other characters, which added a bit of something different to the mix. Another new side character was introduced, Sergio, who could have done with a little more attention from the author. I didn’t get enough sense of his personality, or really understand his motivations. I don’t think this is as much an issue in this book as it would be in others, as Adelina’s character arc is the focus point. It would be nice to have some other characters fleshed out more and given stronger arcs too though.

While the ‘final battle’ was completely enthralling, it was also a bit messy in places. I found it a little hard to follow at times and it could have been clearer what was happening in a few places. Lu did a great job with it though. It was a very large scale and ambitious sequence and she definitely pulled off the suspense and had me on the edge of my seat. I just would have enjoyed it more if it had been easy to follow all the way through.

The series is completely unpredictable because it doesn’t really follow the usual pattern since Adelina isn’t a typical ‘hero’ character. That makes it so tantalising and engaging because I’m really not sure how the series is going to end. Usually you kind of know that the good guys are going to ‘win’ in some way. With this series though, I don’t really have a clue what path Lu is going to take the characters down. I can’t wait to read the final book, The Midnight Star, and find out…

Read my review of book one, The Young Elites, here.