In the dark, filthy salt mines of Endovier, an eighteen-year-old girl is serving a life sentence. She is a trained assassin, the best of her kind, but she made a fatal mistake: she got caught.

Young Captain Westfall offers her a deal: her freedom in return for one huge sacrifice. Celaena must represent the prince in a to-the-death tournament—fighting the most gifted thieves and assassins in the land. Live or die, Celaena will be free. Win or lose, she is about to discover her true destiny. But will her assassin’s heart be melted?

This novel is the first in a series, one which I look forward to continuing reading. Throne of Glass really held my attention. I felt engaged and invested in the fates of the characters.

Mass does a really great job at character development. There was a lot more focus on the characters than I was expecting. This isn’t a fast-paced fantasy. Although I really liked that Mass spent time properly developing her characters (something many YA books fall short on), I would have liked to have seen more of the competition. There are many Tests but we only see a couple of them. Including one or two of the others would have heightened the tension for me and made the tournament feel less sidelined. I did begin to lose interest part way through, with the emphasis on character relationships meaning the central plot was secondary at times, but the book always managed to pull me back in before I got too detached. There is a mystery element running through the story which helped keep the pages turning.

I also took issue with the premise of the tournament itself. The idea is brilliant and a great premise for a book. However, I never really understood why the king would want to choose between assassins, murderers and thieves to be his ‘Champion’. The whole idea of the competition seemed a bit contrived. A little more reasoning to this would have made it seem less forced.

Celaena was a great character, though I would have liked to see more of her flaws and more character development for her. She is the kingdom’s best assassin, she plays the piano, is well read and speaks more than one language. While the piano playing scene was a great opportunity to see a different side of her character, I’m pretty sure she only plays the piano that once. That made it seem a bit pushed in there for that purpose. Too much emphasis is placed on how good she is at everything. More exploration of her flaws and weaknesses would make her a much more rounded character. I have read a lot of reviews where people find Calaena annoying, but I liked reading about a main character who is self-assured and vain, rather than meek as seems to be a YA trend. There are a lot of allusions to Calaene’s past and what has made her the person she is now, but I wanted to see more development of her current character. I hope this will happen more across the series.

END_OF_DOCUMENT_TOKEN_TO_BE_REPLACED 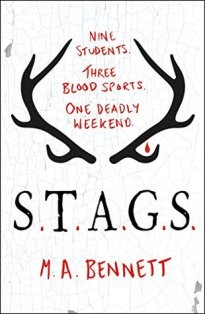 A twisting thriller for fans of One of Us Is Lying and Pretty Little Liars.

It is the autumn term and Greer MacDonald is struggling to settle into the sixth form at the exclusive St. Aidan the Great boarding school, known to its privileged pupils as S.T.A.G.S.

To her surprise Greer receives a mysterious invitation with three words embossed upon on it: huntin’ shootin’ fishin’ – an invitation to spend the half term weekend at the country manor of Henry de Warlencourt, the most popular and wealthy boy at S.T.A.G.S.

Greer joins the other chosen students at the ancient and sprawling Longcross Hall, and soon realises that they are at the mercy of their capricious host. Over the next three days, as the three bloodsports – hunting, shooting and fishing – become increasingly dark and twisted, Greer comes to the horrifying reality that those being hunted are not wild game, but the very misfits Henry has brought with him from school…

The first few chapters of the book were written in a way that included a lot of summary, which I struggled to get into. Although reference to a murder on the first page certainly caught my interest. Fortunately, it didn’t continue with lots of summary and I enjoyed the writing more when the book got going.

I liked that it was set in England, that made a nice change, and how Greer often thought in terms of films as she has watched a lot of them with her dad, so her sphere of reference fit her interests. I enjoyed Greer’s character and her narration. Other characters, however, were not given much personality. The ‘villains’ of this book were very one-dimensional, quite clichéd, and given no individual motivations. They’re rich and evil and that’s basically it.

END_OF_DOCUMENT_TOKEN_TO_BE_REPLACED

Only a true best friend can protect you from your immortal enemies . . .

Lissa Dragomir is a Moroi princess: a mortal vampire with a rare gift for harnessing the earth’s magic. She must be protected at all times from Strigoi; the fiercest vampires – the ones who never die. The powerful blend of human and vampire blood that flows through Rose Hathaway, Lissa’s best friend, makes her a dhampir. Rose is dedicated to a dangerous life of protecting Lissa from the Strigoi, who are hell-bent on making Lissa one of them.

After two years of freedom, Rose and Lissa are caught and dragged back to St. Vladimir’s Academy, a school for vampire royalty and their guardians-to-be, hidden in the deep forests of Montana. But inside the iron gates, life is even more fraught with danger . . . and the Strigoi are always close by.

Rose and Lissa must navigate their dangerous world, confront the temptations of forbidden love, and never once let their guard down, lest the evil undead make Lissa one of them forever . . .

I watched the film adaptation of this before reading the book. Having seen the film a couple of times, I could remember most of it, so there weren’t really any surprises when it came to reading it. Especially as the film is pretty faithful to the book compared to a lot of adaptations. Even so, I enjoyed reading the book and am glad I picked it up. There weren’t any points where I felt bored; Mead kept my interest all the way through even though I knew the story.

Rose’s voice came through in the first person narration strongly right from the start. I had a clear picture of her character early on which showed great characterisation. Lissa was also a good character, along with Dimitri and Christian. Other characters ended up falling into stereotypes and clichés a bit too much, unfortunately.