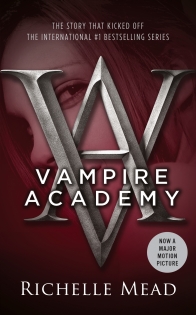 Only a true best friend can protect you from your immortal enemies . . .

Lissa Dragomir is a Moroi princess: a mortal vampire with a rare gift for harnessing the earth’s magic. She must be protected at all times from Strigoi; the fiercest vampires – the ones who never die. The powerful blend of human and vampire blood that flows through Rose Hathaway, Lissa’s best friend, makes her a dhampir. Rose is dedicated to a dangerous life of protecting Lissa from the Strigoi, who are hell-bent on making Lissa one of them.

After two years of freedom, Rose and Lissa are caught and dragged back to St. Vladimir’s Academy, a school for vampire royalty and their guardians-to-be, hidden in the deep forests of Montana. But inside the iron gates, life is even more fraught with danger . . . and the Strigoi are always close by.

Rose and Lissa must navigate their dangerous world, confront the temptations of forbidden love, and never once let their guard down, lest the evil undead make Lissa one of them forever . . .

I watched the film adaptation of this before reading the book. Having seen the film a couple of times, I could remember most of it, so there weren’t really any surprises when it came to reading it. Especially as the film is pretty faithful to the book compared to a lot of adaptations. Even so, I enjoyed reading the book and am glad I picked it up. There weren’t any points where I felt bored; Mead kept my interest all the way through even though I knew the story.

Rose’s voice came through in the first person narration strongly right from the start. I had a clear picture of her character early on which showed great characterisation. Lissa was also a good character, along with Dimitri and Christian. Other characters ended up falling into stereotypes and clichés a bit too much, unfortunately.

The focus in this novel was more on the friendship between Rose and Lissa than romantic relationships. There was romance, but it felt like friendship was put before romance which made a nice change for a young adult paranormal novel. Others I have read have been focused on a main character and a romantic interest, often with friends sidelined. So it was refreshing to see friendship explored more in this one.

The biggest weakness in Mead’s writing was the action sequences. This book wasn’t driven by action, there were only a couple of fight scenes towards the end, but these were very weak. The action was described very vaguely which meant there was no suspense and it wasn’t at all exciting. Even in a book where action isn’t the focus, if you’re going to include a fight scene it needs to be written well. In this novel, they weren’t described well at all.

I was really torn between a 3 or 4 star rating for this one, but since I’ve given books I liked a lot more than this 4 stars, I figured it had better get 3.5 stars. I did, however, very much enjoy reading it.

There’s not much indication at the end of this first book what direction the series is going to go in. With six books in total, there must be some new plot threads introduced in the next book to keep the story going. I’ll be interested to read the next one, especially as I won’t know what to expect since there isn’t a film adaptation.

One thought on “Book Review: Vampire Academy by Richelle Mead”