Unsurprisingly, many book to film adaptations will be gracing the big screen this year, and hoping to be a hit with fans and newcomers to the stories alike. As this is often met with mixed success, it will be interesting to see which of these adaptations are a hit and which don’t quite hit the spot. This is by no means an exhaustive list, but rather ones I am excited to see or have caught my eye. The release dates refer to UK cinema release dates unless otherwise stated.

Based on the Shakespearean character and the novel by Lisa Klein, Ophelia is a re-imagining of the classic tragedy, Hamlet. It premiers at the Sundance Film Festival on 22 January.

Delayed by nearly a whole year as a result of Dylan O’Brien’s injury during filming, The Death Cure is finally here! This film is based on the final book in James Dashner’s Maze Runner series. After the dramatic changes they made to The Scorch Trials (especially the ending) I am both intrigued to see what they’re going to do with this film, and filled with trepidation… 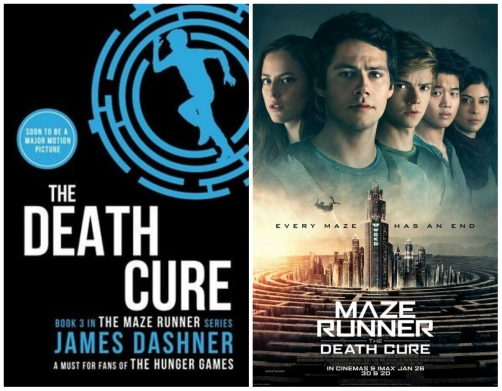 END_OF_DOCUMENT_TOKEN_TO_BE_REPLACED

The Princess Companion by Melanie Cellier

One dark and stormy night, lost and alone, Alyssa finds herself knocking on the door of a castle.

After a lifetime spent in the deep forest, Alyssa has no idea what to expect on the other side.

What she finds is two unruly young princesses and one very handsome prince. When Alyssa accepts the job of Princess Companion she knows her life will change. What she doesn’t know is that the royal family is about to be swept up in unexpected danger and intrigue and that she just might be the only thing standing between her kingdom and destruction.

This retelling of the classic fairy tale, The Princess and the Pea, reimagines the risks and rewards that come when one royal family goes searching for a true princess.

Danger and romance await a woodcutter’s daughter in a royal palace.

I have to admit I wasn’t expecting to like this book. I thought it was probably just the sort of thing I’d be drawn to but inevitably be disappointed by. Therefore, I was very pleased that I enjoyed this read. The book is a retelling of The Princess and the Pea, and I liked that it drew elements of inspiration from that story but didn’t rely heavily on it. Cellier took the concept of the fairy tale and made her own story with it.

At first I wasn’t sure about the story, it did take me a few chapters to get into it. Alyssa’s character was one of the best parts. I found her very likeable and enjoyed reading her narrative. The royal family were all great characters too. Though I found the prince’s strange turns of mood towards Alyssa a little confusing. I guess he was perhaps going through some internal conflict over his feelings towards her since she is only a woodcutter’s daughter, but that didn’t come through as well as it could have. There were a lot of side characters, who were mostly well crafted and likeable. I felt Alyssa’s aunt and cousin, Harrison, were a bit neglected in the last third of the novel.

END_OF_DOCUMENT_TOKEN_TO_BE_REPLACED

I Am Number Four by Pittacus Lore

Nine of us came here. We look like you. We talk like you. We live among you. But we are not you. We can do things you dream of doing. We have powers you dream of having. We are stronger and faster than anything you have ever seen. We are the superheroes you worship in movies and comic books–but we are real.

Our plan was to grow, and train, and become strong, and become one, and fight them. But they found us and started hunting us first. Now all of us are running. Spending our lives in shadows, in places where no one would look, blending in. we have lived among you without you knowing.

But “they” know. They caught Number One in Malaysia. Number Two in England. And Number Three in Kenya. They killed them all. I am Number Four. I am next.

This is one of those rare occasions where I actually watched the film before I read the book. The film came out a few years ago now and I’ve watched it many times. I heard it wasn’t as good as the book (what a surprise) but just really liked the characters. I was therefore hopeful about the book. Even so I put off reading it for a long time, even though it was on my shelf waiting, because the experience of reading a book after seeing a film adaptation just isn’t the same. You already have expectations of what’s going to happen. Nevertheless I did enjoy reading I Am Number Four, and am keen to read the rest of the series to find out where the story goes.

At first I found it hard to read. I couldn’t get into the style of writing. There were a lot of clipped, short sentences and it read a little odd, almost like it hadn’t been edited yet. In the end though I decided it was deliberately written that way, because the style was consistent. I did eventually get used to it though.

The plot isn’t really anything new, unfortunately. Aliens arrive on Earth and guess what, the bad aliens want to (insert bad thing here) take over/destroy the planet. I liked the idea that Number Four and the others had to be killed in order because of the charm protecting them. There wasn’t much unique or new about the plot though.

END_OF_DOCUMENT_TOKEN_TO_BE_REPLACED

Fans have been divided over this film, but I have to say I loved it. No, it wasn’t what I was expecting. It was a little different from other Star Wars films. Yes, that is a good thing from my point of view! I’ve liked (to varying degrees) all of the films. I thoroughly enjoyed The Force Awakens, but it did recycle major plot elements from the original trilogy too much. It didn’t stand on its own two feet. This film did.

It was rather long. It did feel a little episodic, almost like a TV series squished into a film. However, that didn’t really bother me. I just enjoyed the story. There were a lot of twists and turns and although some parts were a little predictable, there were parts that I didn’t see coming and broke from the mould, which I really liked about this film.

Visually and musically it’s stunning yet again. The soundtrack of John Williams is part of what really makes these movies great for me. Some interesting new worlds were explored in this film which made for some new captivating visuals and designs.

END_OF_DOCUMENT_TOKEN_TO_BE_REPLACED

The first T5W of 2018 is about our reading goals for the next year. I don’t usually do this kind of thing, but it was actually interesting to sit and think about where I want my reading to take me over the next 12 months. T5W is a group hosted on Goodreads, if you’d like to participate check it out here.

1) Read more. In 2017 I read 38 books, but a lot of these were from my degree, when I had to sit and read them really quickly. When I don’t have that kind of deadline, it usually takes me 2-4 weeks to read a book. I want to spend more of my spare time reading, as I’ve not been spending as much time doing it as I used to.

2) Read some classics. After spending 3 years slogging through classics (most of which I wouldn’t have chosen myself) I got kind of fed up of them and haven’t touched them since I finished my degree in June 2017. Months later, I finally feel like reading them of my own free will! So I want to get back into some classics of my own choosing this year.

3) Time for some contemporary. I read a lot of fantasy and sci-fi, and would like to read a few more contemporary/general fiction books.

4) Review the books I read. I don’t get round to reviewing a lot of the books I read. This year I want to blog reviews of as many of them as I can. I enjoy thinking about what I’ve read and sharing my thoughts, so really I ought to do it more.

5) Take a chance on me. With the Mamma Mia Here We Go Again trailer coming out, this song just popped into my head. I want to take a chance on books more this year. I want to not just keep reading safe books by authors or in genres I know I love. I want to step out of my comfort zone and read some books I’m not sure whether I’ll like, because I might just find a gem I might not have looked at otherwise.