Just a quick post to say Merry Christmas everyone! Hope you have a wonderful day and happy holidays!

There’s less than a week until Christmas! I’m very excited to being going home tomorrow from uni as it’s been two months since I was last home! So as it is that time of year and I’m feeling really upbeat I thought I would share some of my favourite Christmas songs. These are just some of my personal favourites, not necessarily the best, just ones I really like.

Ashley Maker is a young adult author who recently had her debut novel, Under the Trees, published by Cliffhanger Press. Ashley is from Oklahoma and enjoys writing songs for her books as well as writing them. Under the Trees is a fantasy romance which follows the story of Princess Araya as she runs away to a neighbouring kingdom to escape an abusive arranged marriage. There, she falls into the hands of Prince Thoredmund, who decides to help her and provides refuge for her in his kingdom, unbeknown to his father. As their feelings for each other begin to grow, the fragile peace between the two kingdoms is threatened.

Where did your inspiration for Under the Trees come from?

UNDER THE TREES is actually a complete rewrite of a book I finished when I was nineteen titled ARAYA. The first version was much sillier, and I had an agent tell me it had too much of a Middle Grade tone for a Young Adult book. After a few years of it being shelved, I set out to rewrite it as a Middle Grade book, but the first words of the rewrite ended up being the opening scene of UNDER THE TREES. I knew before I hit the end of the first page that I wasn’t writing the lighthearted, comical MG novel I set out to. Araya’s new voice, and her desperation and fear, sent the novel in a darker, much more mature direction, falling squarely in the upper YA category. I loved it so much I plotted the entire novel around that scene, and on giving Prince Thoredmund his own point of view chapters, whereas before he had little journal entries interspersed at the end of every few chapters. The two versions are so drastically different that they’re hardly comparable today. Just about everything changed.

What made you decide to write from the alternating perspectives of Princess Araya and Prince Thoredmund?

I wanted the reader to be able to see the story from both sides, especially since Prince Thoredmund’s first chapter opens where Araya’s leaves off. There are important things the reader would never get to see if it only followed Araya’s POV, like all of the stuff going on at the castle and how the feud between the two royal families plays out.

What is your writing process? Do you have any habits?

I’m a very slow writer, and I tend to edit while I write. I almost always write in my office at my desk, and before I type anything out, I try to take ten minutes or so to brainstorm what I want to work on that day. As far as habits go, I like to listen to music on Grooveshark, and I always have something to drink and snack on nearby.

How long did it take for you to bring Under the Trees from its planning stages to its final manuscript?

I started the rewrite in the fall of 2010 and finished it in the summer of 2011. That doesn’t include revision, which was an on and off again process all the way up to December 2013.

Who is your favourite character in the book and why?

Prince Silas. He’s Araya brother, and I had so much fun with his character because he’s a bit of a wild card. I’m even thinking of writing a companion novel from his POV one day.

Do you have any advice for writers hoping to be published?

Write what you want. If writers followed every piece of advice, or tip, or trend, we’d be writing in circles or not able to write at all. So write something you love and will be proud of, regardless of what others say about it. After your book is revised and ready, that’s the time to look into publication. Be sure to do lots of research on the different avenues of publishing so that you can find the best one for you. If you choose to submit to agents or publishing houses, make sure they’re legitimate since you’ll likely be working with them for years if they offer on your book. Also, while you’re shopping your book out, try to write something new. Publishing is one big waiting game. Having something new to focus on helps during those periods when things are going slow.

Under the Trees is available now in paperback and on Amazon kindle.

For more information on Ashley and the novel see:

You can read my review of the book here.

Anybody can take a photograph, but it takes a little something to take a great photograph. That something is an alternative point of view. Taking a picture of something straight on often creates quite a generic image. Try crouching down and angling your camera up at the subject or tilt the camera so it isn’t quite straight on. Taking your photo from a different angle can completely change how the image looks. 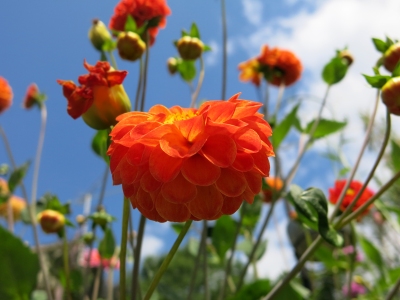 Lighting is also very important. Change the place you are standing in to see how sunlight or artificial light changes the image. The middle of the day is the worst time for taking photographs outside as there are no shadows, so everything looks flat. If you take photos earlier or later than midday then shadows add depth to the image. If you are photographing at night then you need to utilise the light sources available to you – think about what is illuminated and what is not.

I’m in my first year at university, currently living in halls on campus, and since December hit I decided to spruce up my room with some Christmas decs! I had a great time putting them up while listening to Christmas music. I thought I would share some pics of my little grotto!

As much as I love uni, I’m very much looking forward to Christmas this year as I will get to go home and see my parents for three weeks.

Mockingjay Part 1 continues from Catching Fire as Katniss Everdeen finds herself amongst the rebellion in District 13. Distraught at the Capitol’s capture of Peeta, Katniss must battle with herself to bring herself back from the darkest places of her mind. A propaganda war ensues as President Snow attempts to quash the rebellion, and District 13 hope to rally the districts to their cause with Katniss as their symbol – the Mockingjay.

It is firstly important to say that this review is coming from someone who has read the books, and is a massive fan of both the books and the films. Yet again, the film is very close to the book. A few small changes have been made but arguably for the better. One example is that Effie has a much larger role in the film than she had in the books, which I don’t mind because Elizabeth Banks does such a great job at playing her character.

To people who have not read the books Part 1 may seem a little slow. I’ve seen a lot of people commenting on how they found it boring. That may be because it isn’t as explosive as the first two films. All the books are split into two parts, and if The Hunger Games and Catching Fire had been split into two, people would think the ‘Part 1’ films were boring. That’s just the structure of the books, the way they work. Mockingjay Part 1 does a very good job of building up to Part 2. There is still a lot of action and suspense in Part 1 and there are plenty of twists and turns to keep you interested.

You get a much better insight into the characters in this film. They have gone through so much, now we get to see how they deal with it. There is a lot of character development in this part, especially with Katniss and Finnick. One thing that wasn’t so good was Gale. He just sort of floats around, still the same as he was at the start, I feel like they could have done more with his character. There is one scene when they are in District 12 in which he describes how it was destroyed which gives us a glimpse into him. I just feel they could have done more. Overall though the acting continues to be stupendous. Julianne Moore does an excellent job with President Coin.

Overall, yes go see it! If you read the books then definitely see it (I expect that’s a no brainer though). Some people think it’s boring, but if you think that then bear in mind it will be worth it for Part 2!