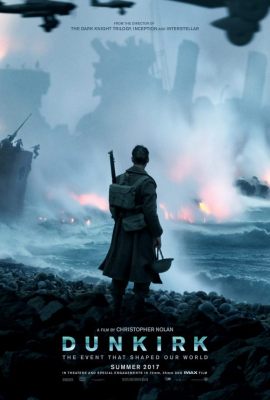 I was quite stunned to discover that this film was still in cinemas yesterday when a friend suggested we watch a flick. Almost seven weeks since its release date, Dunkirk was not only still on with multiple screenings per day, it was still showing in Empire’s biggest screen at my local cinema – the Impact screen. It was my first time in the big Impact showing, and the screen was absolutely massive, covering the entirety of the front wall of the room. The sound was bogglingly loud, much louder than a normal screen, and unfortunately I’m not good with loud, so the sharp racket of gunfire and bass heavy soundtrack wasn’t enjoyable for me and did spoil the experience a bit. The film itself was great, and I would gladly see it again (in a quieter, though unfortunately smaller, screen or at home where I can change the volume).

The name of the film says it all. It follows the events of the evacuation Dunkirk during the Second World War. While it was a mark of a military defeat, the evacuation of thousands of soldiers was a victory. The film follows several characters closely – a group on the beach trying to get on a ship to take them home, fighter pilots in the air, and the civilian boats coming to rescue the stranded soldiers.

It was in some ways a very strange film. There was no context and no set up. It starts at Dunkirk. Most of the characters the film follows are unnamed, and nothing is known about them. I think this was probably a deliberate artistic choice, which was interesting and different from the norm for historical films. However, it also made me feel disconnected from the characters.

The filming was spectacular. They used minimal CGI, filming on location at Dunkirk beach and with real planes and ships. It was refreshing to know that what I was seeing was mostly real, as so often these days filmmakers rely on CGI when some of what they are filming could be done without it.