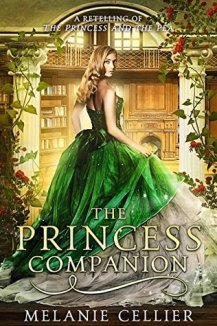 The Princess Companion by Melanie Cellier

One dark and stormy night, lost and alone, Alyssa finds herself knocking on the door of a castle.

After a lifetime spent in the deep forest, Alyssa has no idea what to expect on the other side.

What she finds is two unruly young princesses and one very handsome prince. When Alyssa accepts the job of Princess Companion she knows her life will change. What she doesn’t know is that the royal family is about to be swept up in unexpected danger and intrigue and that she just might be the only thing standing between her kingdom and destruction.

This retelling of the classic fairy tale, The Princess and the Pea, reimagines the risks and rewards that come when one royal family goes searching for a true princess.

Danger and romance await a woodcutter’s daughter in a royal palace.

I have to admit I wasn’t expecting to like this book. I thought it was probably just the sort of thing I’d be drawn to but inevitably be disappointed by. Therefore, I was very pleased that I enjoyed this read. The book is a retelling of The Princess and the Pea, and I liked that it drew elements of inspiration from that story but didn’t rely heavily on it. Cellier took the concept of the fairy tale and made her own story with it.

At first I wasn’t sure about the story, it did take me a few chapters to get into it. Alyssa’s character was one of the best parts. I found her very likeable and enjoyed reading her narrative. The royal family were all great characters too. Though I found the prince’s strange turns of mood towards Alyssa a little confusing. I guess he was perhaps going through some internal conflict over his feelings towards her since she is only a woodcutter’s daughter, but that didn’t come through as well as it could have. There were a lot of side characters, who were mostly well crafted and likeable. I felt Alyssa’s aunt and cousin, Harrison, were a bit neglected in the last third of the novel.

At the beginning of each section of the novel there are some odd chapters told from the point of view of another character. The switch to third person (from Alyssa’s first person perspective) was a little jarring, but not totally off putting. What was more irritating was that at the end of these third person chapters there would be a strange head hop for the last paragraph, where it switched to another point of view just for a few sentences. This was an odd decision for me. I could see why she included those third person chapters, but the strange and confusing head hopping at the end of them was a bit odd.

The last quarter of the book wasn’t as polished as the rest. Cellier is better at writing the slow paced scenes. A couple of the ‘action’ scenes were described a bit too mechanically, and didn’t have the tension and excitement I would want to experience while reading an escape scene for one example. The ending was also a bit rushed compared to the steady pace of the rest of the book.

Although I only gave it 3 stars, it was entertaining. It was simply a good, easy read, which sometimes is all you’re after from a book. I would consider reading more books by Cellier. The Princess Companion is the first in a series of connected books which feature the other princesses from The Princess Companion.