This comes to you a day late as I wrote down the wrong date! Never mind. The next release from the Just-Us League writing group is A Bit of Magic, a Collection of Fairy Tale Retellings. The anthology will be released on the 31st May. Today I bring you a reveal for the gorgeous cover, created by Louis Rakovich at Indigo Forest Designs. Each story in the anthology is accompanied by an illustration by Heidi Hayden. 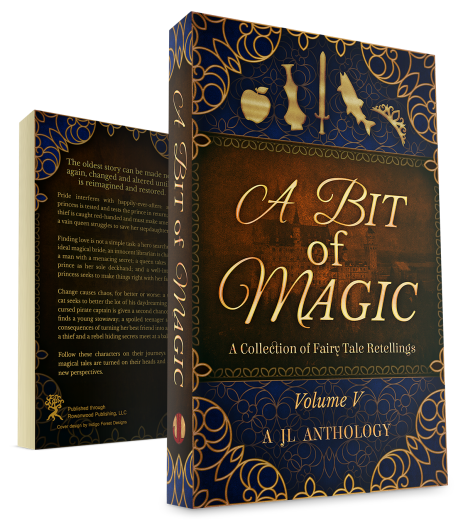 The oldest story can be made new again, changed and altered until it is reimagined and restored.

Pride interferes with happily-ever-afters: a proud princess is tested and tests the prince in return; a young thief is caught red-handed and must make amends; and a vain queen struggles to save her stepdaughter.

Finding love is not a simple task: a hero searches for the ideal magical bride; an innocent librarian is charmed by a man with a menacing secret; a queen takes a spoiled prince as her sole deckhand; and a well-intentioned princess seeks to make things right with her father.

Change causes chaos, for better or worse: a scheming cat seeks to better the lot of his daydreaming master; a cursed pirate captain is given a second chance when he finds a young stowaway; a spoiled teenager suffers the consequences of turning her best friend into a toad; and a thief and a rebel hiding secrets meet at a ball.

Follow these characters on their journeys as eleven magical tales are turned on their heads and seen from new perspectives.

A Bit of Magic is the fifth anthology published by the Just-Us League and is available to preorder now from Amazon.

The A Bit of Magic blog tour continues through May and June with interviews with the authors. On 27th May I’ll be interviewing Lynden Wade, author of the short story ‘Reed Girl, Fire Girl, Cloud Girl’.