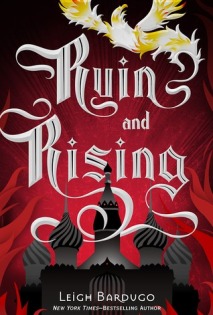 Ruin and Rising by Leigh Bardugo

The capital has fallen. The Darkling rules Ravka from his shadow throne. Alina will have to forge new alliances and put aside old rivalries as she and Mal race to find the last of Morozova’s amplifiers. But as Alina begins to unravel the Darkling’s secrets, she reveals a past that will forever alter her understanding of the bond they share and the power she wields. The firebird is the one thing that stands between Ravka and destruction – but claiming it could cost Alina the very future she is fighting for.

The final book in the Grishaverse trilogy was, unfortunately, a little disappointing. While I liked the book, it didn’t pull me in, not in the same way the first two books did.

There were too many inner monologues for Alina that just felt repetitive. Her thoughts and emotions could have been written better in places. Elsewhere, the writing was good though, and I continued to enjoy the world building. I thought it was interesting how Alina was viewed as a Saint. It’s not something I’ve really seen in fantasy before, but totally makes sense for someone with ‘magic’ to be viewed that way by some people.

Bardugo is pretty mean to her characters in this book, things rarely go the ‘heroes’ way, which I liked. It showed how the characters had to keep getting back up and fight mentally to keep persevering. Though Bardugo seemed to be taking this book in a dark direction, it somehow ended up being too soft in the end, which I don’t mind, except the lead up led me to think it was going a different way. Like the author wanted to take it in a darker direction at the end, but dipped their toes in and decided to back out. Perhaps I’m wrong, maybe she wanted a touch of darkness, but was always going to end it in a less dark way. The fairy tale framing does suggest there would be a happy ending of sorts.

END_OF_DOCUMENT_TOKEN_TO_BE_REPLACED

A Dark And Hollow Star by @paper.ashley is one of my fave reads of the year so far! I was lucky to get an eARC and just had to preorder a finished copy. The world building is so creative and immersive, and the characters came to life in the pages. This book was such a fun ride!
Just finished this massive novel, but it was so worth it! I loved the way all the character's stories were interwoven through the book, coming together for an epic finale. And the detail in the world building was exquisite. @say_shannon has crafted a book that came to life in my hands. If you're hesitant about picking this up because of its length, trust me you don't want to miss out!
Recently I reorganised my shelves and finally managed to fit on my gorgeous @illumicrate Daughter of Smoke and Bone book ends! They are so stunning, one of my fave pieces of bookish merch!
Day 4 and last day of the @fairyloot photo challenge! 📸
Day 3 of the @fairyloot photo challenge. 📸
Day 2 of the @fairyloot photo challenge. 📸