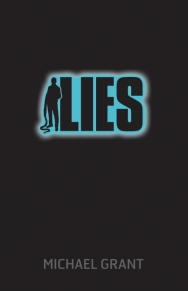 Suddenly, it’s a world without adults and normal has crashed and burned. When life as you know it ends at 15, everything changes.

Tensions are growing in the FAYZ. The mutants are under attack. Food is scarce. Sam’s gone AWOL.

At night, a solitary figure roams the streets– the ghost of a boy with a whip hand, haunting the dreams of those he has tormented.

Then the town is deliberately set on fire… And through the flames, Sam sees the figure he dreads most–Drake. But that’s impossible: Drake is dead.

Lies is the third book in Michael Grant’s Gone series. I really wouldn’t recommend leaving big gaps between reading the books in this series. I read the first book in 2014 and the second book, Hunger, in 2015, so it’s been three years since I read it. There are so many characters and their individual storylines and arcs to keep track of, that it was hard to dip back in after so long away from the series. I read a summary of the first two books online which was helpful, but not quite the same as when you can remember more of the detail. So if you read this series, don’t leave it too long between reading each book like I have!

This is one of the grimmest YA series I have read. It really proves YA isn’t just about clichés and love triangles. It can be gritty, dark and meaningful. It’s so interesting watching how things play out in the FAYZ over the course of the series (it really is like a modern Lord of the Flies, with superpowers). It digs deep into how people would react in that kind of situation, how desperate they could become, and how ‘normal’ just collapses and becomes something totally different, something that’s more about survival than living. In this book, Astrid is still trying to get rules and laws into place to give the FAYZ more order, so life isn’t just about survival.

The book is a little chaotic. There are lots of characters and no real main story arc/plot line. That would be bad for most books, but it somehow works in this series. Maybe because the situation the characters have landed in is one of chaos. Things came together more at the end, and it became clearer where things had been heading.

I looked back at my review of the first book to remind myself of my reaction to the series initially. I was doubtful about how Grant would stretch the plot out for six books, but having read the first three now, I don’t have those same doubts. Maybe it will drag to the end, maybe not. There are a lot of characters and plot threads, it’s quite complicated in many ways, so I can see it sustaining my interest until the end.

Looking at my review of book two, I also had some problems with that one, namely plot holes and characters. Perhaps Grant got more stuck into this series as he went along, because I didn’t have those same problems with this book. There was more character development than in the second book. Sam is haunted by memories of Drake, Astrid is struggling to bring peace to the FAYZ and the problems that come with being head of the council, while Caine and Diana struggle with lack of food and what that does to them psychologically. Mary also developed in an interesting way in this book.

As with the first two books in the series, I was glued to Lies. It’s so unpredictable and I just wanted to keep reading. I will be reading the next book soon…