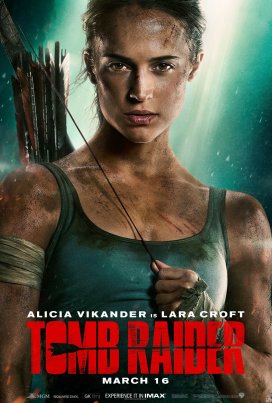 Tomb Raider is a reboot of the film franchise, loosely based on the reboot of the video game. This vision of Tomb Raider is a little different from the Angelina Jolie films you may be familiar with. Alicia Vikander portrays a young Lara Croft, unable to accept her father’s death, and living away from Croft Manor. In search of her father, she journeys to a remote island off the coast of Japan where he had been looking for the tomb of Himiko. Alicia Vikander does a great job playing Lara, but there are few other substantial performances to make the film come alive.

Those who have played the 2013 game will recognise some similarities here, but the film is quite loosely inspired by the game rather than being an adaptation of it. Some things are familiar like Lara’s bow and arrow, the climbing axe and some of the action sequences, for example when she is washed down the river. Otherwise, the film takes quite a different story to the game.

END_OF_DOCUMENT_TOKEN_TO_BE_REPLACED

It's the last day of Pride Month! 🌈
QOTD: Are there any books you would love to see made into a film or TV show? 🎬
QOTD: What new books are you excited about this month? 📚
Happy Pride Month! 🏳️‍🌈 🥰
Audiobook review - The Atlas Six by Olivie Blake 🪶
Unboxing the April @fairyloot box! 🧚‍♀️