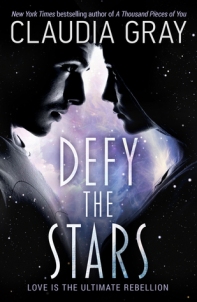 Defy the Stars by Claudia Gray

Noemi is a young and fearless soldier of Genesis, a colony planet of a dying Earth. But the citizens of Genesis are rising up – they know that Earth’s settlers will only destroy this planet the way they destroyed their own. And so a terrible war has begun.

When Noemi meets Abel, one of Earth’s robotic mech warriors, she realizes that Abel himself may provide the key to Genesis’ salvation. Abel is bound by his programming to obey her – even though her plan could result in his destruction. But Abel is no ordinary mech. He’s a unique prototype, one with greater intelligence, skill and strength than any other. More than that, he has begun to develop emotions, a personality and even dreams. Noemi begins to realise that if Abel is less than human, he is more than a machine. If she destroys him, is it murder? And can a cold-blooded murder be redeemed by the protection of a world?

Stranded together in space, they go on a whirlwind adventure through Earth’s various colony worlds, alongside the countless Vagabonds who have given up planetary life altogether and sail forever between the stars. Each step brings them closer – both to each other and to the terrible decision Noemi will have to make about her world’s fate, and Abel’s.

When I received this book as a gift, I was really excited to read it. I love science fiction, but somehow have managed to only really read dystopian or apocalyptic sub-genre sci-fi. This is coincidental rather than deliberate, as I love space operas such as Star Wars and The Expanse on film and TV. So this book, although in one of my favourite genres, looked quite different to other sci-fi I’d read before.

Thank goodness I received it as a gift, because if I’d picked it up in a bookshop, it might have ended up back on the shelf. It’s important to note here that I absolutely loved this book. However, the opening chapters are definitely the weakest point for me. Therefore, if I’d picked it up in the bookshop and read the first few pages, or however much time I had to read, I might not have bought it. And that would have been a travesty because then I wouldn’t have been able to enjoy this amazing novel.

The problems I had with the opening chapters could partly be down to getting used to the writing style – the novel is told in chapters that alternate between the point of view of Noemi and Abel. However, I don’t think that’s totally the case with this one. Once the problematic first few chapters were out of the way, I instantly got into the way it was written, so I don’t think that’s what the issue was. There were two main issues.

Firstly, the novel opened with an action-packed space battle. Sounds exciting, right? Except when the author starts giving you random bits of back story in the middle of it. I’m glad she didn’t do a total info dump, it was sprinkled in nicely, and some of the information was important to understand what was happening. But most of it the reader didn’t need to know right at that moment, in the middle of what should have been an exciting few chapters. Stepping out of the intensity and tension of the fight to give the reader little bits of information just totally sucked the suspense out of the opening chapters. It really is a shame because I loved the rest of the book.

Issue two with the opening chapters – repetition. I liked that there was some overlap in the chapters because it was interesting to see how the two characters reacted to those moments differently. However for some reason in the opening chapters (and this seemed to be a particular issue with Abel’s point of view chapters) it would, for example, be Abel’s point of view, switch to Noemi, and then when it switched back to Abel, repeat some of the information or thoughts from Abel’s previous point of view chapter. I found this incredible irritating and it prevented me from getting into parts of those exciting few chapters because I was being told something I’d only just been told a few pages before, which really wasn’t necessary. This isn’t even something that carries on in the rest of the book. It’s only a problem in these first few chapters. And that is what is so frustrating. These problems I have discussed are literally only a problem in the first few chapters. The rest of the book is brilliant. If not for the weak opening chapters it may even have got five stars from me, which is pretty rare.

Now we’ve got those frustrating issues out of the way, onto what I loved about this novel. The central characters – Noemi and Abel – are really great. What was so good was how Gray showed the differences in their perspectives – one a human, one a mech, and from warring planets – and how their views of each other and the society they live in changes as the book progresses. The question of what it is to be human and what it is to have a soul is central to this novel and Gray portrays it excellently. The conflict Abel has between his programming and his new thoughts is written very well.

On the subject of conflict, there is so much inner conflict and external tension in this novel that really drives it and keeps the momentum going. Abel is from Earth and therefore Noemi’s enemy, but she is forced to work with him. Noemi is from Genesis and therefore Abel’s enemy essentially, and he wants to get back to his creator, but his programming means she becomes his new commander and has to obey her. There is just so much tension right from the beginning between the characters, but this also then means that there is lots of room for them to grow. Both main characters have really strong arcs. We see them change, develop, alter their world views as they go to different planets and both for the first time actually see what the world outside their front door is actually like.

This isn’t just an exciting sci-fi action story. It has complexity and explores its characters thoughts and changing perspectives so well, as well as exploring the issue of the way we treat our planet, and other sociological issues.

I could ramble on for ages about how much I liked this book. After those first few chapters, it really kept me gripped all the way through. I wanted to know what would happen. I cared about the characters. Importantly I want to know what will happen next, so I can’t wait for the next book to come out!