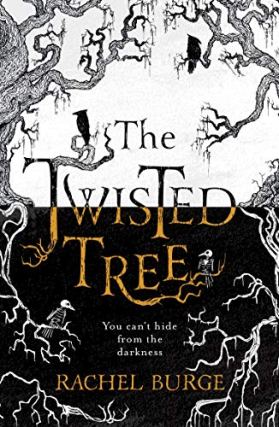 The Twisted Tree by Rachel Burge

Martha can tell things about a person just by touching their clothes, as if their emotions and memories have been absorbed into the material. It started the day she fell from the tree at her grandma’s cabin and became blind in one eye.

Determined to understand her strange ability, Martha sets off to visit her grandmother, Mormor – only to discover Mormor is dead, a peculiar boy is in her cabin and a terrifying creature is on the loose.

Then the spinning wheel starts creaking, books move around and terror creeps in . . .

Set in the remote snows of contemporary Norway, THE TWISTED TREE is a ghost story that twists and turns – and never takes you quite where you’d expect.

Can’t lie, the cover is partly what attracted me to this book. I love trees as a visual, and often take photographs of them, so that got my attention. The cover also gives off creepy, mysterious vibes that piqued my curiosity. I also liked that it sounded a little unique, and certainly quite different to other YA fantasy I have read.

Rachel Burge does an amazing job of creating a mysterious, spooky atmosphere. The suspense is great and really had me on the edge of my seat and rooting for the main characters. It’s actually scary at times. The plot didn’t follow the typical heroes fighting evil villain route as such, which I found refreshing. Norse mythology was weaved in well with the plot and fit very naturally.

The detail put into Martha’s ability to tell things about someone by touching their clothes is incredibly inventive. Different materials have different properties and so she sees/senses different things about the person depending on the material. That added depth to the ability, making it not just a superficial ‘magic power’ but something that had been really well thought through.

It made a nice change to read a short book as well, and one that was well paced. It was the right length for the story being told, rather than being drawn out or having too much crammed in. Burge did a great job of developing the friendship between Martha and Stig so well in such a short space.

This book was so close to being a 5 stars for me, but I didn’t like how the author brought questions about Stig up near the end that were left unanswered. It didn’t even seem to have any particular effect to leave it that way. I don’t mind authors leaving some things unanswered or ambiguous, but I can’t see why it was done on this occasion. It just meant I was left slightly unsatisfied. It made me wonder if it has been left open for a sequel, but I’m not sure one would be necessary. It felt like a self contained story, and I was satisfied by the resolution of the main plotline.

Overall, I loved it. The Twisted Tree is a very gripping read. I can highly recommend for anyone looking for something with a bit of mystery, and something that’s a little scary!