This topic was actually trickier than I thought it would be. Looking back at release dates, I realised I haven’t actually yet read any books from 2018 or 2019! I need to catch up! So my list spans the 10 years from 2008-2017. 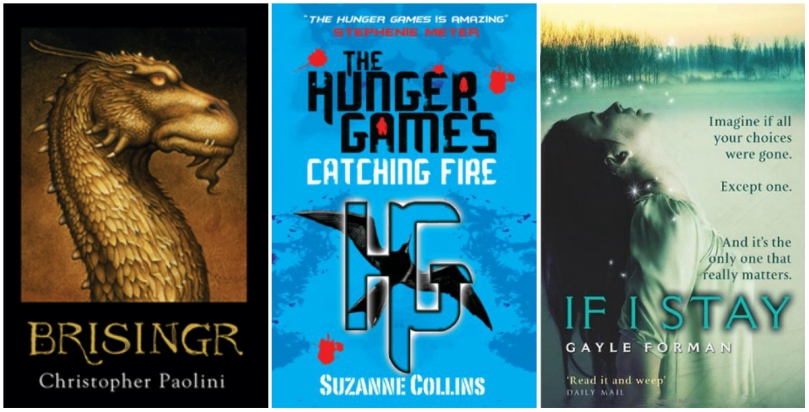 2008 – Brisingr by Christopher Paolini – I loved the Eragon series, and would really like to re-read them sometime. I remember the second book, Eldest, being a little boring in places, but thought the other books were great.

2009 – Catching Fire by Suzanne Collins – The whole Hunger Games trilogy is brilliant, but of the three I think I’d have to say Catching Fire is my favourite.

2010 – If I Stay by Gayle Forman – Having read a lot of fantasy and sci-fi, I am glad a realistic fiction book makes this list. I found If I Stay to be such a touching and emotional read.

2011 – Daughter of Smoke and Bone by Laini Taylor – I read this book this year and absolutely fell in love with Laini Taylor’s storytelling. Hands down one of the best books I’ve ever read.

2012 – Blood Red Road by Moira Young – It feels like such a long time since I read this book, but it remains high up on my list of favourites, and I’d like to revisit it sometime.

2013 – Crown of Midnight by Sarah J Mass – I can’t believe it’s taken me so long to get round to reading this series. I read the first and second books last year, and want to read the rest when I can get my hands on them.

2014 –City of Heavenly Fire by Cassandra Clare – The Mortal Instruments is one of my favourite series and this was such a great conclusion to it. Cassandra Clare has such an amazing way of bringing her characters and stories to life.

2015 – The Rose Society by Marie Lu – The darkness of this series is what drew me in. Seeing the dark inner conflict of the protagonist written in such a way was so fresh and exciting to read.

2016 – Replica by Lauren Oliver – Although I was disappointed by this book’s sequel, Ringer, at the time when I read Replica I was captivated by the unique format of the book and felt invested in the characters.

2017 – Defy the Stars by Claudia Gray – One of my favourite recent reads. This book blew me away. I thought it was absolutely brilliant and I can’t wait to read the sequel.