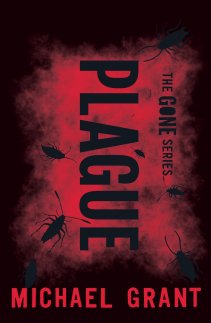 It’s been eight months since all the adults disappeared. Gone.

They’ve survived hunger. They’ve survived lies. But the stakes keep rising, and the dystopian horror keeps building. Yet despite the simmering unrest left behind by so many battles, power struggles, and angry divides, there is a momentary calm in Perdido Beach.

But enemies in the FAYZ don’t just fade away, and in the quiet, deadly things are stirring, mutating, and finding their way free. The Darkness has found its way into the mind of its Nemesis at last and is controlling it through a haze of delirium and confusion. A highly contagious, fatal illness spreads at an alarming rate. Sinister, predatory insects terrorize Perdido Beach. And Sam, Astrid, Diana, and Caine are plagued by a growing doubt that they’ll escape or even survive life in the FAYZ. With so much turmoil surrounding them, what desperate choices will they make when it comes to saving themselves and those they love?

I have mixed feelings about Plague, the fourth book in Michael Grant’s Gone series. If you’re squeamish, there are some scenes in this novel that will really make you want to close the book. Warning: do not eat while reading this. I really shouldn’t have been surprised since the title of the book is ‘Plague’. There are people coughing their insides out or having evil bugs hatching out of them and eating them alive – gross. Let’s not linger on that.

Grossness aside, this is a great book. While the previous books in the series felt quite disjointed to me, this one fit together much better. Each of the individual threads were tied together so nothing felt random or out of place like some of the scenes or story lines in the previous books did. All of the plot elements were heading in one direction, which made this novel gel better.

The power relations and struggles are really interesting in this book and the series as a whole. Dynamics between all the characters is one of the things that keeps pulling me back to this series. It’s great to see how relationships, friendships and rivalries evolve over the course of the story as different problems are thrown at the characters.

There is so much complexity in all of the characters and they continue to develop in this novel, which I am glad about since that is something that was lacking in the first two books. Some of them did annoy me a bit in this book, but they have been through hell so I can maybe forgive them for being irritating. Nobody’s always nice. Nobody’s always perfect. Toto – a new character – added some much needed humour to what is a very grim series. Not laugh out loud comedy – that would be kind of out of place – but enough to give me a wry grin and break up all the disaster, tragedy and death going on left right and centre.

There are some issues in this series with presentation of female characters. At times they are presented as weak and needing saving or protecting. At the beginning of the series as well there seemed to be an imbalance of lead male/female characters. However, the more I think about it and further the story goes on, there are some really good things. There are a long list of female characters who are strong for one reason or another – Dekka, Brianna, Dahra, Lana and more. Brianna saves Caine’s arrogant butt in this book which made me figuratively punch the air – I wouldn’t do that literally…. Dahra is someone who I feel gets forgotten about, but she’s running a hospital practically on her own, trying to learn as much as she can from textbooks, and is the one who figures out they need a quarantine to stop the plague spreading. So while there are some problems, there are also some really great parts to the presentation of female characters in this series.

There was no let-up in this book. It was packed with lots of action and suspense and the ending was so mysterious and intriguing. I’m still really not sure how this series is going to end, and that’s one of the things that keeps me reading. It’s unpredictable and I want to see how this tangled web is going to be resolved.

Forest of Souls was one of my favourite books of 2020 so I am very excited to get my hands on the sequel, Broken Web! 🕸️
A team up between a gravedigger, a mapmaker and a dead goat. What more could you want? 🐐💀
Have you watched Shadow and Bone? I've only watched the first episode so far but I'm loving it! The sets and costumes are stunning, and the acting is just on point. 😍
Shadow and Bone is out on Netflix tomorrow!! 🥳 I'm so excited to see the world of one of my favourite series come to life on screen!
Crownchasers reminded me why I love YA scifi and why I need more or it! This book was such a wild, planet-hopping adventure and I had a lot of fun reading Alyssa's character. I cannot wait for the sequel, Thronebreakers, to come out in October!
A Dark And Hollow Star by @paper.ashley is one of my fave reads of the year so far! I was lucky to get an eARC and just had to preorder a finished copy. The world building is so creative and immersive, and the characters came to life in the pages. This book was such a fun ride!