Now this isn’t just a list of my favourite books. Some books you just can’t keep re-reading as it isn’t the same. I don’t often re-read books actually as there are so many new ones out there that I want to read! So here are some either I have re-read before or want to in future. 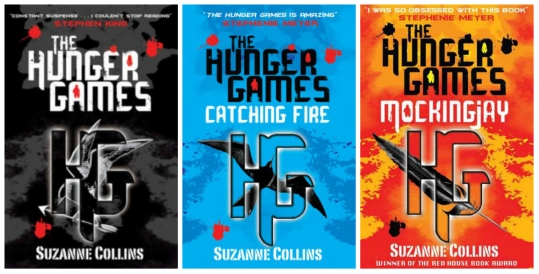 1) The Hunger Games by Suzanne Collins

I re-read the whole trilogy last year and was amazed how much I loved it yet again. Even though I have seen the film loads of times so the general plot is ingrained in my brain, I was still totally gripped even though I knew what was going to happen!

This was my favourite of the trilogy when I first read them. It’s never the same as reading it for the first time, as there are so many twists in this book, but I still really enjoyed re-reading it. I can imagine reading it again and again and still loving it.

Despite the final film being split into two, they still missed out a lot from this book, so I found it interesting to re-read and remind myself of all the things I had forgotten about. For example Katniss and Joanna having to do lots of tough training in District 13 to be allowed to fight, or the treatment of Flavius, Octavia and Venia.

4) Ombria in Shadow by Patricia McKillip

This story is so rich in beautiful descriptions. I’ve read it twice but I really want to re-read it again as it’s my favourite novel.

5) The Haunting of Alaizabel Cray by Chris Wooding

It’s been a while since I last read this, but I have re-read it several times. The story is really imaginative and totally gripping. It’s quite scary and spooky in an edge-of-your-seat you don’t know what’s coming round the corner kind of way.

I have only read this once but it was so action-packed and exciting that I can imagine re-reading it over and over.

7) The Murder of Roger Ackroyd by Agatha Christie

I don’t want to keep re-reading this because I loved it. I only gave it 3 stars. My reason why is a massive twist so I won’t specify as it would totally ruin the book if you haven’t read it yet. I would re-read it to look for clues that suggest it was the person they think committed the murder. I’d also see if I could figure out if it really was that person, or if it the murderer was a different character as theorists have speculated.

There is so much detail in these books that I feel like I want to keep reading them because there is so much that I can’t remember from the first time I read them. I have only re-read The Fellowship of the Ring once. They are so long that I am unlikely to re-read them lots of times, but I would like to.

I want to read this book for similar reasons to The Lord of the Rings. There are four books in the series, all of which are quite long, but I absolutely loved them when I read them the first time.

Another fantasy series. I’ve grouped these together for a reason, because my reason for wanting to re-read them is almost the same. Fantasy series are often rather chunky and rather long. I re-read the first book in this series – Dragons of Autumn Twilight – a few years ago, and now I want to re-read the rest of the series as after all this time I can hardly remember what happens. This series was so important for me as it really solidified my love of fantasy.

What books would you re-read?

7 thoughts on “Top 10 Tuesday: Books I Could Re-Read Forever”

✨ New releases from these authors I'm excited for this year ✨
This @fairyloot edition of The Shadows Between Us is so beautiful. This was a surprise favourite for me last year, as I didn't expect to like it anywhere near as much as I did. It's been a year since I read it and what a strange year it's been...
I recently finished reading Gut Feelings by @yafictionados and wow this book was just so good.
The trailer for Shadow and Bone was released today and it was even more amazing than I imagined. I'm so excited to see this world brought to life. This stunning collector's edition came out last year, hopefully they'll do collector's editions for the rest of the series too. 🤞
The problem with reading series is having to make room for the sequels. Think I'll be rearranging my bookcases again soon. 👀
Oh WOW this book knocked it out of the park, definitely the best book in the series so far, and the only one I've given ⭐⭐⭐⭐⭐ #throneofglass #queenofshadows #sarahjmaas #aelinashryvergalathynius #calaenasardothien #bookstagram #bookblogging #reading #books #youngadult #fantasy #ya #yafantasy #bookworm #amreading #booksofinstagram #bookblog #bookblogger #yabookstagram #booksbooksbooks