As we are now just over half way through 2017, I decided to post a list of the best books I have read so far this year. I have reread some books – Harry Potter and the Philosopher’s Stone, The Lion the Witch and the Wardrobe, and the Hunger Games trilogy – but this list will feature books I have read for the first time.

I rarely buy hardback books – they’re too expensive and heavy. However, I just could not wait for the paperback of Replica to come out. The idea of the story being told from two points of view, and flipping the book over the read the second half of the story, just seemed so cool. I was curious to see whether Lauren Oliver could pull it off, and desperately hoped I wouldn’t be disappointed. I was not, and it is one of my favourite books I have read this year. Without the two ‘stories’ in one, would the actual plot of the book hold its own? I’m not sure, but I

definitely enjoyed it in this form, and the two points of view weren’t gimmicky like I had feared. I eagerly await the next book in the series, and hope it lives up to the first one.

This is the first novel I have read by Laurie Halse Anderson, and will forever be one of my favourite books. It doesn’t shy away from the difficult topics it deals with. The poetic writing style and imagery is stunning. The metaphors woven into the book are really effective. I felt totally pulled into the story. 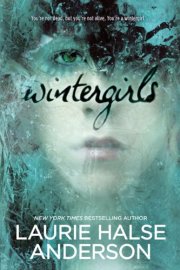 With Wintergirls, Laurie Halse Anderson once again writes about mental health. I found the writing as engaging as that of Speak, and although this is also one of my favourite books, it didn’t bowl me over in the same way as Speak. I didn’t know much about eating disorders before reading this book, and I found it enlightening to read about what it can be like to experience it.

Having seen and enjoyed the film when it came

out, I wanted to read the book. The characters are aged up somewhat for the film, so the beginning of the book is even more shocking consider the child characters are so young. Ender is only six when he is sent to Battle School to begin his training. Some parts of the book were slow, but on the whole it kept me reading, with a satisfying twist at the end.

This is the second book I have read by Ellen Hopkins, and only the second verse novel I have read. The book tells the story of a girl who becomes a drug addict. This is another one with tough subject matter! What I liked about the book is how Hopkins utilises the verse form to reflect the narrator’s addiction and mental state. I found it highly effective.

These are the best books I have read so far this year. I wonder what my favourites will be at the end of 2017!