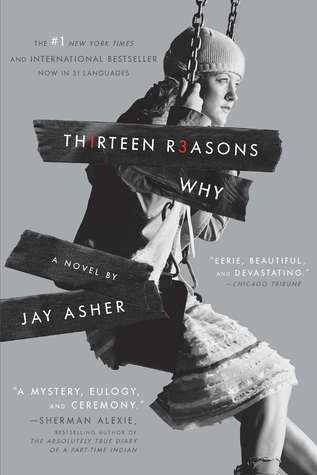 Thirteen Reasons Why by Jay Asher

You can’t stop the future.

You can’t rewind the past.

The only way to learn the secret is to press play.

Clay Jensen returns home to find a strange package with his name on it. Inside he discovers several cassette tapes recorded by Hannah Baker – his classmate and first love – who committed suicide two weeks earlier.

Hannah’s voice explains there are thirteen reasons why she killed herself. Clay is one of them. If he listens, he’ll find out why.

All through the night, Clay keeps listening – and what he discovers changes his life…

Where to begin. I don’t give five star reviews much. I have to love a book so much it hurts. A five star review, to me, isn’t about a book being perfect. A book can’t be perfect, it’s impossible. A five star book is one that will stay with me forever.

I’ve wanted to read this book for years, and finally found myself opening the cover a few days ago. I don’t usually write a review right after finishing a book. I give it a couple of days to let it sink in. But today I’m writing this review having finished Thirteen Reasons Why half an hour ago.

The book uses the dual narratives of Hannah and Clay as he listens to the tapes Hannah left behind. It was hard to get around my head that Hannah was dead before the book even started. Isn’t there any hope? Can’t Clay save the day? No. This isn’t a book about saving someone, it’s about exploring what happened to them to make them give up.

Hannah’s voice really popped out of the page. It was haunting, imagining her voice replaying through those tapes. Asher managed to capture her voice excellently since we only get to know her through her voice on the tapes (well, there’s some of Clay’s memories of her, but we don’t see those through her eyes so it isn’t the same). I thought the mix of the two narratives worked well for the format, with Clay’s actions and his reflections on what he was hearing mixed into the tapes. It means you get to see his thoughts and responses to what he’s hearing in real time, as he’s hearing it. It wouldn’t have worked so well any other way. However, I would have liked to know Clay’s character more. By the end of the book you know nothing about Clay, except the parts of his life that relate to Hannah. Which, in a way, makes sense because to me Hannah was the protagonist of the story, not Clay, even though she was already dead before the book started. Clay was just a vessel to carry her story. But Asher could have breathed more life into his character. I got a bit of a sense of what he’s like, but not much. But maybe that’s not important for this story. Would it add to the value of the story if we were told unnecessary details or back story about Clay? No, actually, it probably would have distracted from the point of the story. So maybe it doesn’t matter.

I’ve read other reviews about how the reasons aren’t really reasons why someone would commit suicide, how Hannah was whiny and needs some perspective etc. but actually that’s the point. And highlights the problems with attitudes to mental health in our society. You can never know exactly what someone is thinking and feeling. We only hear what Hannah wants us to know on the tapes. We know nothing else about her life. A lot of little things (and bigger things) can build up to make you feel really awful, so there might have been more to it than what was on the tapes. We don’t know. We have no way of knowing. Those are the things she picked out to talk about, but that’s not necessarily the whole story. There isn’t always an explanation or reason for the way you feel. Sometimes you don’t even understand what you feel, never mind why you feel that way. Maybe this is Hannah trying to understand herself as well, to understand why she’s gradually felt worse.

Another thing discussed in other reviews I read was not getting enough emotion from Hannah, but I can see how someone who has got to that point may actually be quite detached from their own story. Hannah has already given up when she is making the tapes, she’s already made the decision to kill herself and it’s like she’s relaying her life from the other side of a glass screen. Nobody reached out to her, and so maybe the tapes are a last attempt to save herself, to go over what has happened to her, to get it out her system. But it doesn’t work, it just reminds her of all the ‘reasons’ to kill herself. There are so many interpretations to this story, because there are so many unknowns. All we have to go on is the tapes, and what Clay remembers about some of the events.

I think this book has an important message (or many messages, actually) – about how our actions influence others, and how even though it may seem insignificant in the context of the rest of that person’s life it actually has a bigger impact than you’d think. About how all it takes is someone to notice, to listen, to reach out, to tether someone to this world. Every action has a consequence.